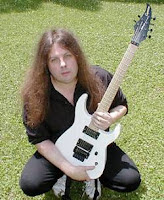 When asked about playing on other CD's

Yeah that's usually how it is: like I did that thing with Arjen for the Ayeron album and some stuff for the Stratavarius guys - I played on Timmo's album. You know, it's guys who you meet along the way through touring - and then you might meet up again at Festivals and everything - and you become good friends with these guys: so it's often like "Oh I'm doing a solo album - do you wanna come and do some playing on it?" Like the Drover brothers from Megadeth: they had their own record and I played on that - and it's definitely a cool thing just to step away from the band a little and kinda do something different.

When asked about the new solo album:

It's always something I have in the back of my mind - y'know, when we're off from Symphony X for a little bit I crack into some of my own stuff. I keep on adding bits and recording some little pieces - and just kinda keep it together: but it's tough because the biggest thing that I have a problem with is doing something, having to stop due to the band - and then coming back to it months later. It can be hard to keep the momentum up.