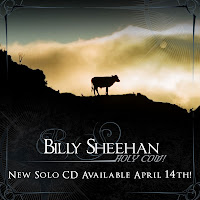 Billy Sheehan, will perform songs from his latest release Holy Cow at MI in Hollywood, CA. This special performance will be held in the Musicians Institute Amphitheatre and is open to the public. First 500 fans will be guaranteed seating up close to see Sheehan play, ask questions and meet Sheehan one-on-one. Doors open at 5:30 pm, show starts 6:00 pm, admission is free so get there early!

Sheehan pulled in top-notch arsenal with guest performances by Billy Gibbons on 'A Lit’l Bit’l Do It To Ya Ev’ry Time', Paul Gilbert (who played with Sheehan in MR. BIG) on 'Dynamic Exhilarator', Dug Pinnick (KING'S X) on the song 'Turning Point' as well as Ray Luzier on drums and shred master Tony MacAlpine.

Ironically I have had this CD since it's Japanese release and it's well worth a listen.