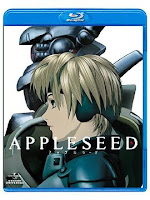 Blu-ray release of animated sci-fi theatrical movie based on the celebrated manga written by Masamune Shirow of "Ghost In The Shell" fame. Created by the director Shinji Aramaki, the producer Fumihiko Sori, the musician Ryuichi Sakamoto, and more talented creators. In 2131, nonnuclear warfare ends. Deunan Knute is taken to Olympus, a city of balance and perfection by her former lover Briareos who is now a cyborg after being wounded in battle and Hitomi, a Bioroids (artificial humans). Half of the population in Olympus are Bioroids who are much more stable and balanced than humans. Some believe that Bioroids are a threat to human beings, while others believe that humans are a threat to the future of Olympus. Bioroids Plans for shaking up persistence of human beings are secretly in the works. The key of this plan is "Appleseed." The battle to save the future of human beings now starts.