Sky Academy seminar to Los Angeles/Orange County for the fourth straight year in June. The aim is to enable students to get to a higher level of playing ability, overall musical awareness and inspiration.

"it has always been one of my talents to spot the talent of others and to help make it grow by pointing out certain things which are apparent to me, but not necessarily to the eyes and ears of the student.

"My own journey through music and life has revealed to me a way of approaching the instrument and music in such a fashion that maximum progress can be achieved in the shortest amount of time. I don't know whether I have stumbled upon a secret here, or rather just a series of interactive laws, but whatever it is — it sure works, and it's about time that I share some of that knowledge with the younger generations." 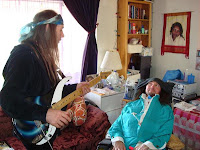