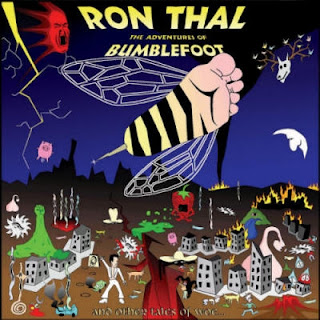 The very first album from guitarist Ron "Bumblefoot" Thal, The Adventures Of Bumblefoot, is being re-released after 15 years, as well as a 200-page transcription book of the album by Ron himself. Both will be available at BaldFreak.com later in August, with autographed CD proceeds going to Multiple Sclerosis research. Copies of the album have been selling for as much as £375 on eBay. The instrumental The Adventures Of Bumblefoot, was originally released in 1995 by Shrapnel Records in North America and Roadrunner Records in Europe and Japan.
Ron Thal