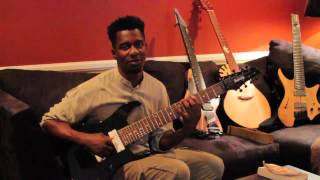 ANIMALS AS LEADERS ANNOUNCE "CAMPING WITH ANIMALS" WINTER RETREAT
Progressive instrumental staple ANIMALS AS LEADERS have announced a winter retreat entitled "Camping With Animals," which will feature their current lineup - Tosin Abasi, Javier Reyes, and Matt Garstka -- as well as The Faceless bassist Evan Brewer and other guest appearances. The retreat will consist of four days of seminars from January 2nd to 6th at the Full Moon Resort in Big Indian, New York. Participants will have the chance to get one-on-one instruction from the band members, workshops, seminars, gourmet meals, exclusive performances, and of course regular camp activities. Registration is open now HERE!

Main guitarist Abasi, who was recently featured on the cover of Guitar World magazine, released the following statement: "As a musician, I’ve benefited the most from demonstration. I hope to create an environment for other aspiring musicians to do the same. I and the other instructors involved will be at your disposal to provide an opportunity for growth and inspiration. I believe that this is truly a unique group of players with highly individual approaches to their instruments together in one place at one time."

You can also watch the below video for more information on the event and a personal invitation from Mr. Abasi! Animals As Leaders are currently continuing the touring cycle for their critically acclaimed 2011 release "Weightless" which was one of the five highest-charting releases in PROSTHETIC RECORDS history. The band will next be seen headlining the Rock Party Festival in Long Beach on 9/29 before heading out as direct support for an international tour with Between The Buried And Me, which will see the band play throughout New Zealand, Australia and Japan. Complete dates can be found listed below.

# with Between The Buried and Me
Camping with Animals - Tosin