Yngwie Malmsteen: Copyright is everything to a musician 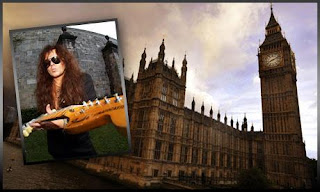 Yngwie Malmsteen visited Britain's iconic Houses of Parliament in London on Thursday (September 20) to offer his patronage to "Rock The House".

"People like myself are very lucky in having already established a loyal fanbase," Yngwie said, according to Classic Rock magazine. "If I put out a new record, my fans will know about it and buy it. But the younger musicians of newer generations, their future doesn't look too good. Everyone seems to have a CD out or YouTube videos, you know? Back in the '80s, if you had a record out, you were hot shit!"

Yngwie also vented on the issue of illegal music downloading and many music fans' seeming disregard for intellectual-property rights.

"Copyright is everything to a musician," he said. "Just like inventions, the music you write is like your own child. If it gets sold to people, you should be rewarded. No one should be able to take it from you."

He continued, "You don't go around stealing cars! The rules should apply to music, film, books, etc. Anything that can be distributed should be accounted for. Something has to be done. The machine is broken." full post