Yngwie Malmsteen: Let’s talk guitars. Why strats?... Is there another guitar? 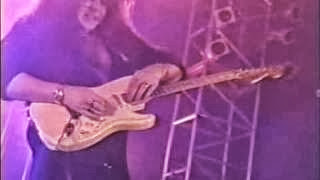 
Yngwie: Is there another guitar?


Justin: It’s funny you mention that because I heard that Gibson made you a Stratocaster. Is that true?


Yngwie: They did. I am proud to say that before me there was nobody who got a free guitar from Fender. Hendrix and Blackmore, they had to buy their own guitar. I was the first guy who got a free guitar and I was the first guy to have his name on one, before Clapton. One of the reasons I think it happened that way was because when I came on the scene, Van Halen was all the rage. That almost resulted in the Stratocaster’s demise because in the late 70’s they weren’t being made very well. Also, they wanted to chop them up and put the humbuckers in them and stuff. Then my first album came out and the first thing you see on the cover is a Stratocaster. I was playing in California and the guys from Fender came to my show and said they wanted to make me a guitar. I thought they were joking because they never did that for anybody but they were actually serious. I sort of joked back with them and said, if they made me a guitar it has to be scalloped, knowing full well that making a scalloped neck in the factory would be super expensive. But I told them what I would want, sort of humoring them. They said they’d put my name on the guitar on top of the guitar – on the side of the body so that I could see it when I was playing. I told them no, that I wanted my name right on the fucking headstock next to the Stratocaster name. I was completely joking when I said that but they did it and that’s how all the signature models have been ever since.


My thing with the Stratocaster started when I was 6 or 7. That’s what I wanted because that’s what all the cool people used. My older brother had an electric guitar that looked like a strat but it was like a toy almost. That was the only guitar I ever really wanted. The design is timeless – I actually have one of the first 10 ever made. I have other guitars – Les Pauls, Flying V’s, 335s, I’ve got shitloads of basses. I’ve got guitars that friends have given me like Brian May and Steve Vai.