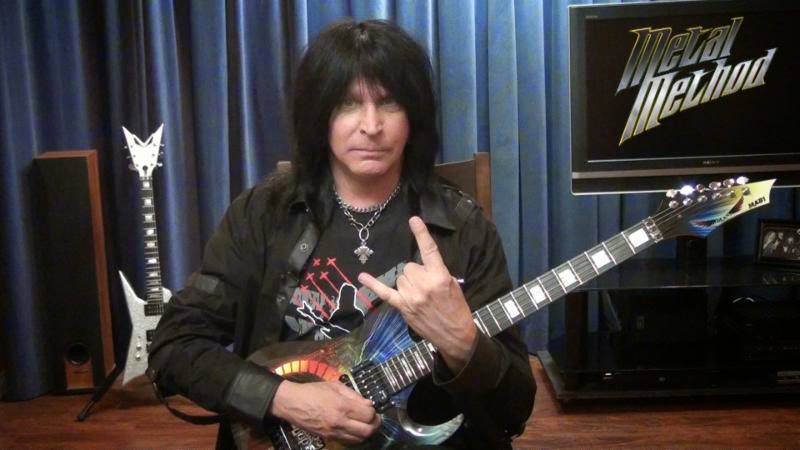 That's right. You heard it here first. There's black Friday, the day after Thanksgiving. Then there's cyber Monday. By the powers vested in me as President of Metal Method I proclaim today Heavy Metal Tuesday to stimulate holiday guitar lesson sales. From this day forward the first Tuesday after Thanksgiving will be known as Heavy Metal Tuesday (providing I remember this next year).

Michael and I began working on this program using the working title, "How to play really fast!" It is about that, but so much more. For this program we really wanted to reveal Michael's secrets, to dig deeper for these instructions than any previous lesson he's ever done. For example, one of the most basic shred techniques is sweep arpeggios. You've never heard his sweep secrets revealed to this extent before. It's not just a matter of "rolling" your fretting hand. There are a series of moves happening with both hands. He demonstrates these moves slowly and in great detail.

Many of these exercises are short and to the point. For example, Michael describes the one measure economy picking exercise as, "Learn this and you will have mastered economy picking." Simple but true.

So, we started with "How to play really fast!" and by the time the program was complete we realized thatMichael Angelo Batio had actually revised the entire Speed Kills series.
The Guitar World Reader's Poll selected Michael Angelo Batio as the "Fastest Guitarist of All Time"

So if you want to learn to play really fast, you've come to the right place. You're being taught by the fastest. But he didn't learn to play that fast without mastering every shred technique in existence. And these are the secrets that Michael will share with you here.

Maybe you don't have any interest in shredding. Still, an occasional burst of speed can create drama and showcase your talent. As Michael explains, "It's better to have it and not need it than to need it and not have it." Are you ready to have it? I thought so.