September 29, 2009
A chance for Shred Junior to show his quality? http://www.ukairguitar.com/ 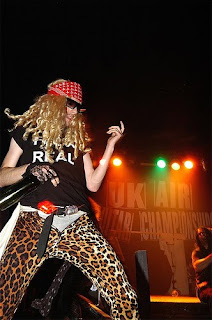 Greetings to all interested in the amps that go to 11, spandex, big mirrors and loud rock music... Welcome to our world
What you need to know

The contestants are judged by the audience. History has told us that sweet moves and outrageous costume is what you need to be a winner.Each contestant gets to choose a track of their own for round one. If they make it to the second round then they will air duel against another. The final round will have the 3 best contestants of the night in an air off to the death... And then we will have the 2009 Champion!The 2009 UK Air Guitar Championship Final is near, the current UK Air Guitar champion Cozza is ready for his first night as host and with a capacity crowd expected its going to be mayhem...
UK Air Guitar News

UK final day with Phillip and Holly27th Sept 2009The day of the UK Air Guitar Championships final is only days away, we have 18 finalists at present and we are leaving 2 entry places for whoever fancies their chances on night, just the way that Cozza did back in 2006. On final day, Cozza will be taking 2 of this years contestants on to the ITV This Morning show with Phillip Schofield and Holly Willoughby, to give all a lesson in the fine art. Last years runner up Stephen 'Twanga Joe' Gagola and the current Irish champion Declan Gillick 'Deku-Chan', will also be appearing and rumour has it that they will take on David 'The Hoff' Hasselhoff in air-a-long in the studio on the day. Then the 3 of them will have to leg it to Brighton to warm up for the final. We are all praying to see Gordon the Gofer. We will smash world record..29th July 2009This is the year of record breaking. In association with the Royal Air Forces Association, we will be attempting to break the current world record for the most amount of people air guitaring at the same time at a staged event. The current Guiness world record is held by 'Be your best rock challenge' who managed 1261 people rocking to the Foo Fighters Pretender at sheffield arena on July 11th this year. We will be attempting to get nearly 3000 people invloved at Wolverhampton race course on Sat 3rd of October to raise money and awareness for RAFA. For more details Click HereThe Future of UK Air Guitar..21st July 2009Since 2006 Colin 'Cozza' Fulker has been the reigning champion with 3 consecutive wins, and to this day is the UK Air Guitar Champion. The competition was thrown into disrepute as it was deemed as unfair that Cozza should be allowed to take part furthermore as no-one else gets a chance because of the fingerlicking skills. So, we have decided to hand the true Air Guitar champion the ultimate prize, which is the rights to the competition, to run and host forever! In return a vow of air guitar celibacy has been taken to ensure a brand new 2009 champion..