Brian May, Bernie Beibl: Queen and Tangerine Dream a marriage made in the heavens?

on June 05, 2011
Thanks to my brother who attended a recent Tangerine Dream gig just after the recent Rush gig. After said event my brother proceeded to tell me he was sat very near Queen guitarist and well know astrophysicist Brian May. In normal Truth In Shredding fashion... we said... yeah right! did you have your glasses with... show me the proof... and other supportive comments like that.... well it appears I need some custard to drown the hat which I now have to eat...a big thanks goes to Gerry Frisk for capturing the moment and humbling the cocky Truth In Shredding editor. 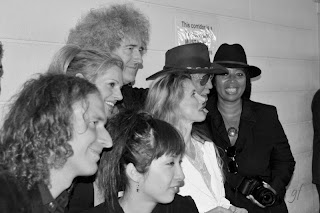 Further it appears that Tangerine Dream and Brian May have been working together on music to pay tribute to Soviet cosmonauts Yuri Gagarin and Alexei Leonov:

Brian May and Tangerine Dream are teaming up to pay tribute to Soviet cosmonauts Yuri Gagarin and Alexei Leonov - Queen guitarist Brian May has joined with Germany’s etherial electronic music group Tangerine Dream to record two songs dedicated to Soviet cosmonauts: one to Yuri Gagarin, the first man in space; and another to Alexei Leonov, the first man to carry out a space walk. The songs will be debuted at the Starmus science and music festival being held in Tenerife and La Palma, Spain, in June to mark Gagarin’s flight on April 12, 1961. more