on December 01, 2011
Nicolas Notarianni: Nicolas Notarianni, a French guitarist who uses the stage name Guitarsnake, is a virtuoso who released his solo CD, "Around The World" in 2011 on Mad Guitar Records. The instrumental album is a masterpiece of colorful and emotional guitar music, crafted with flawless guitar technique and a unique feel.

This "group panel" interview was conducted with Notarianni in cyberspace to get answers to questions concerning his gear, promotion and his early development. more 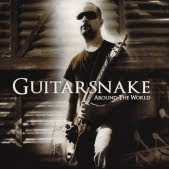