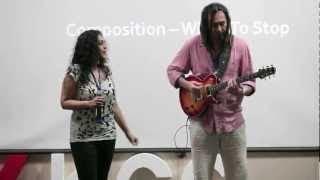 Edward DeGenaro is a fusion guitarist whose unique mix of bebop and metal sounds, along with a whole lot of the DeGenaro personality, collectively called the "Nude Guitars" sound, has been compared to the likes of Scott Henderson, Frank Gambale, and Steve Vai. Ed's journey in music began in Germany, where he was born and raised. At an early age, he studied cello but quickly picked up the guitar as his instrument of choice for venting his artistic expression. He is one of the few talented guitarists who can make shredding look effortless on a fretless guitar and make the guitar groove to just about any sonic exploration, encompassing funk, blues, ethnic, jazz, metal and much more. After receiving a degree in Performance and Teaching from the German National Conservatory of Music in Nuremberg, he worked as a "hired gun" guitarist and session player, performing all over Europe before relocating to LA and finally to Seattle, where he currently resides. Ed DeGenaro's journey as musician or engineer includes Bob Dylan, Craig Erickson, Elliott Sharpe, Henry Kaiser, David Byron Band, Accept, Hammerhead, Alcatraz, producers David Rosenthal (Rainbow, Robert Palmer) and Roy Thomas Baker (Queen, Cars), and work on various feature movies, TV commercials and major labels such as EMI, Atco and Atlantic.

Ujjayinee Roy is a singer, composer and writer from Chennai, India. She has also been the voice behind numerous songs in Tamil, Hindi, Kannada, Malayalam and Telungu films and has worked with the likes of A R Rahman and Illayaraja. She has also lent her voice for numerous jingles, ad-films and voice-overs. Her journey in to the world of music began in the small town of Agartala at the age of three when she began training in Hindustani Classical Music. Ujjayinee started performing for All India Radio and Doordarshan Kendra from the age of seven. Later she also started performing in classical concerts and after training in Hindustani for twenty years moved to the city of Bangalore. Since then she has lived in Chennai, Kolkata, Bombay and in the year 2007 re-located in Chennai where she performs and teaches music. She has also been associated with Radio Mirchi, Kolkata as an RJ and producer. She is also a poet, lyricist, composer and columnist. Ujjayinee has judged, been interviewed and has featured in various television shows. She is also a theater artist and performs with a theatre group called The Madras Lights, in Chennai. She has been the founder member of bands like Tribe and Aurko and has been for the last 7 years a part of a musical project called Noize Inc. Ujjayinee has been working and experimenting with various genres of music like electronica, opera, rock, Indian and Western classical, jazz etc. Besides that, Ujjayinee is also a bharatnatyam danseuse and performs professionally.

In the spirit of ideas worth spreading, TEDx is a program of local, self-organized events that bring people together to share a TED-like experience. At a TEDx event, TEDTalks video and live speakers combine to spark deep discussion and connection in a small group. These local, self-organized events are branded TEDx, where x = independently organized TED event. The TED Conference provides general guidance for the TEDx program, but individual TEDx events are self-organized.* (*Subject to certain rules and regulations)