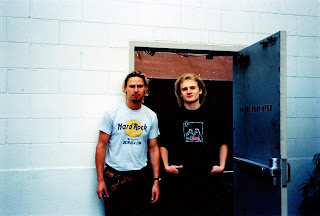 With Antti Kotikoski outside MI studios, Hollywood, L.A. 1995. After our studies at GIT, we had recorded a bunch of demo tracks there with TJ Helmerich behind the desk and some very special guests: Scott Henderson, Dan Gilbert, Frank Gambale, Scott Kinsey and Carl Verheyen all joined us. At the time of this pic, Mark Varney offered to release the music on his Legato label and we were psyched to become part of the Varney stable. We had two more tracks to go and were working on the remaining tracks 'Dirt' and 'Music For Runyon Canyon'. Great times!

Even better times ahead: 'Generator (2013 remaster)' will be rereleased in a couple of months on Richie Rich Music, fixed, remastered, plus bonus track! The cd has been out of print for a long, long time and I can't wait to get the music back out there. Keep an eye out for that: www.richardhallebeek.com and of course I will keep you posted here. https://www.facebook.com/richardhallebeek

Plus Richard in full fusion flow for Sebastiaan Cornelissen
support me with my new album Not This Time.http://sebastiaancornelissen.blogspot...