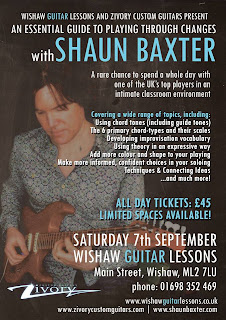 An Essential Guide to Playing Through Changes with Shaun Baxter
Saturday, 7 September 2013

Wishaw Guitar Lessons and Zivory Custom Guitars are proud to present for one day only, the magnificent Shaun Baxter.

Shaun's name is synonymous with guitar playing in the UK and anyone who has ever picked up Guitar Techniques magazine will recognize the huge gift he has given to the guitar world with his monthly Creative Rock column which has been running since 1994.

Shaun co-founded the Guitar Institute in London back in 1986, where he taught for over 20 years, as well as at the London College of Music. He has also been Head of Guitar at Guitar X, and is now an owner and Academic Director of the Academy of Music and Sound, the biggest network of instrument-specific popular music schools in the UK, which already has 8 centers up and down England and Scotland.

Shaun is also notorious for his groundbreaking album Jazz Metal which was released back in 1993 and it is a tour de force of hi-tech guitar wizardry!

A master of technique, theory and style; Shaun's exclusive Scottish masterclass is not to be missed!

The focus of Shauns class will be on playing over changes though he will be able to answer any questions you might have about him, his career or his playing.


The topics covered on the day....

- The 6 primary chord-types and their scales

- Using theory in an expressive way

- Add more colour and shape to your playing

Chances like this do not come often and at Wishaw Guitar Lessons we aim to give you what you want. Let one of the UK's top guitar players and instructors for the last 25 years show you what every modern guitar player needs to know!

Shaun will also be performing live in the evening with the WGL house band Chunga's Revenge as part of our 1 year anniversary. More details soon!

You can buy your tickets at http://www.wishawguitarlessons.co.uk/events.php