Ryan Buckner: The Overlooked Songwriting Element That Will Improve Your Musical Expression Skills

on September 02, 2013
The Overlooked Songwriting Element That Will Improve Your Musical Expression Skills
by Ryan Buckner
Would you like to know how to accurately express yourself through music? To become a highly expressive songwriter, you must dedicate yourself to writing music on a continual basis. You will invest MANY hours of practice into your songwriting before you can write songs that truly sound the way you want them to.
That said, you can seriously cut down the time it takes you to master musical expression and write great songs by avoiding a common mistake made by most songwriters: Overlooking or under-utilizing important songwriting elements. In this article, I am going to discuss one of the songwriting elements that is most frequently overlooked (often causing songs to sound dull and uninspiring). This important songwriting element is “Dynamics.”

NOTICE: If you are currently thinking: “Dynamics? I already know about that... it only means making music louder and softer, that’s all.” ... Then you have already begun to overlook the unique creative qualities of this musical element (this is the same mistake that most musicians make). You see, many songwriters overlook the element of dynamics while thinking of things like which chords to use, how to write a melody or what song lyrics to write. As a result, they miss out on one of the most effective musical tools for powerful self-expression.

The following list contains some of the great uses for dynamics that will help make your music more musically expressive. When you fully utilize dynamics in your music, you will:
The Fundamentals Of Musical Dynamics
When it comes to dynamics most people understand this to describe the general volume level of a song. However, dynamics refers to both overall volume of the music as well as the individual parts that make up the music as a whole. Whenever you read a piece of music, you will see various letters that are used to display the dynamics. These have been developed and changed over a span of centuries until arriving at the letters we have today. Here are a few examples: 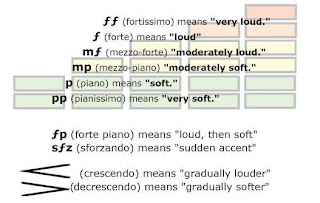 How To Use Dynamics In Music Tip #1: Enhancing Musical Expression Through Contrast
One of the strongest ways to keep the attention of your listeners is using contrasting dynamics. For instance, a common example of this can be observed in most pop/rock ballad songs: Usually, the song will begin with soft acoustic guitar/vocal parts and no percussion. Once the song has made it through the first chorus, the drums come in to add contrast to the dynamic range of the music as a whole. To add even more contrast to the song, there may also be a louder solo section that uses distorted guitar that plays in a higher pitch register. Then after solo/break section has ended, the softer parts take the foreground in the music again to make the contrast stand out. This approach of contrasting louder and softer dynamic levels is great for emphasizing entire song sections to make the stand out from one another. To hear a perfect example of this type of song, listen to Nothing Else Matters by Metallica.

How To Use Dynamics In Music Tip #2: Surprise Your Listener With Silence
One musical tool that is frequently overlooked is ‘silence’. Silence (or “rests”) is an excellent way to increase the expressive impact of dynamics. For instance, imagine if you were listening to loud music with headphones and suddenly the battery ran out on your mp3 player. This would instantly grab your attention and cause you to say “What’s going on? Where’s my music?” This exact reaction can be recreated by using silence to build up anticipation in the listener for what is to come next. Use this idea in your own music by experimenting with different lengths of silence in between your musical phrases to get different expressive results.

How To Use Dynamics In Music Tip #3: Giving More Life To A Melody
To make any melody stick out, emphasize it by using varying dynamics. For instance, begin the melody “loud” and gradually reduce the volume until the notes are “soft”. This technique is known as a “decrescendo”. Additionally, alter the volume level of different notes within a melody to make them contrast with each other and stick out. This is especially useful for adding interest to repeating musical parts in your songs. This will give you the power to express yourself in different ways without altering any of the actual pitches in your melody. Use this songwriting technique guide to learn many ways to become more creative while writing your musical melodies.

Common Situations Where Dynamics Are Effectively Used For Musical Expression
A very underestimated approach that can help you learn how to better express yourself in music is to study the scores of your favorite movies. I don’t mean you need to purchase the actual score itself and read the music… but instead simply observe the way the music is arranged with different scenes throughout the film. This will help you equate the emotions expressed by the actors along with the music and build your ability to express yourself better in your songwriting.

Here are some common examples:
Example One: Expressing a sense of increasing or decreasing emotional intensity with dynamics
Here is type of scene from almost every romance film: The scene takes place at a train station toward the end of the film. Sitting in front of the train, there is a couple who are trying to decide if things can really work out between them (for now, the music is playing a sad, soft melody in the background). After a short discussion, they both come to the conclusion that the relationship simply cannot be sustained due to outside circumstances. “That’s life”, the man says to the woman, “Sometimes things just don’t work out the way you want them to”. The man gets on the train as it begins to board its final passengers. He takes a final look out the window at his lover and sits down at his seat to contemplate what life will be like without her. The camera cuts back to the woman, who begins to cry. It appears as if the story is going to end on a sad note as the man looks down at his feet while flashing back to ‘the good times’ they had together. We watch as the train leaves the station. All seems lost, until suddenly the woman looks up to see the man standing at the other end of the terminal. Now, the music begins building intensity by becoming louder (crescendo). The lock eyes and begin running toward each other (music continues building louder and louder)… until they share a big embrace and passionate kiss! Now the music has reached its loudest point and climaxed, creating a perfect expression of the building tension and release of the situation.

Ex. #2: Using dynamics to create a feeling of surprise
Visualize a scene in a movie like this: It’s 11:30AM and there is a businessman standing at a packed street corner waiting for the “walk” sign to turn on so he can cross. All around him you can hear the sounds of the big city such as cars honking, the roar of continuous chatter and street vendors yelling out to attract new customers (you can also hear upbeat music playing in the background to set the scene). Suddenly, the sign turns on and the businessman looks up from his watch as everyone starts crossing the street in a big moving mass – bumping into him along the way. He adjusts his coat and quickly makes his way across the street. As he quickly jogs across he suddenly trips and drops his briefcase... papers go flying everywhere. He falls to the ground, scrambles to pick them up and stuff them into his briefcase as quickly as possible while losing focus of his surroundings. Finally he grabs the last one... “Gotcha!” he says as he crams it inside. Then, as he stands up to dust himself off you hear the loud screech of a car slamming on the breaks as it comes to an instant stop in front of him.

At the end of this scene, what is a good way that the music in the score could emphasize the stress of the situation? In many cases for a scene like this, you will hear the music quickly build up to end on a very loud group of notes. This feels very surprising when compared with the previous musical ideas played in the background and is very expressive of the sudden shock the character might feel.

Example Three: Using rests/silence to enhance dynamics and add a sense of mystery.
In this last example, imagine a scene in a horror movie that takes place inside of a large, haunted mansion with a man walking around by himself. At this point in the scene, he believes he saw a ghost and begins slowly walking from one room to the next. Each time he takes a step, you can hear the old wooden floors of the mansion creaking beneath him. “Who’s there?” he says out loud (suddenly, you hear the sound of a single cello beginning to build in volume). Out of nowhere, something seems to scurry along the ground behind him. He snaps around to see what is going on (the music stops and there is silence)... nothing there but an old antique rug. The man bends down to inspect the rug, already layered in what seems like a century of dust. “How long has this thing been here?” he wonders out loud. Then his ears perk up as he hears the floor creak behind him. A drop of sweat runs down his forehead and his face turns cold (the cello begins playing again to build up suspense... getting louder and louder). He slowly turns his head around and suddenly everything goes dark. You hear a terrible scream, then... total silence.

After reading the many examples in this article, you should now have a good understanding of the role that dynamics play for musical expression. By making dynamics a main focus in your songwriting, you will be able to write music that better expresses specific ideas and emotions while adding more depth to the individual parts of your songs.

Learn how to become a more expressive songwriter using dynamics and other tools of songwriting by downloading this free songwriting technique guide.


About the author:
Ryan Buckner is a professional musician, guitar player and composer. His online songwriting lessons website contains a free songwriting mini course that has helped many musicians around the world improve their songwriting.