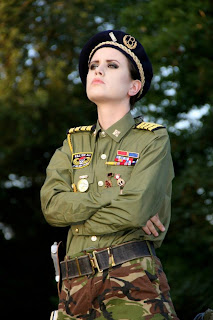 The Commander-In-Chief
The totally awesome people who were part of making my dream come true when it comes to my new release were many.
At the video shoot:
My awesome Mercenaries, who are fantastic MMA fighters from Gods of War; Phil Else (head coach and owner who also choreographed the fighting scenes), Egoagu Adoh (my sidekick in the video), Chris Djaelani, Adam Smith and Ryan Lovejoy! They all performed beyond the call of duty!!!
All the Extras who did a fantastic job!
The staff at the Estate where we filmed.
The farmer who let us use his fantastic fields to shoot some scenes.
Our secret Helper who did soooo much and wants to remain anonymous:):):)
Captain Hagen, who bought me the revolver and let me use his epaulets when we created my uniform.
My two brothers, who are both in the video.
The never-sleeping Alien who wrote the script, directed, filmed and edited the video.
My manager, who worked her ass off, as usual.
My hair and makeup artist.
The very helpful guys at two different Army stores who helped me get the right gear.

For the recording of the song:
Engineer James Mottershead, who engineered and mixed the song! He did an amazing job!!!
Stephen Marsh who did the mastering over in his fantastic studio in Hollywood!
The one and only Brian Tichy who did drums.
Bass player extraordinaire Peter Sæverud from my home town Bergen in Norway.
Monnow Valley Studio´s fantastic owner Jo and her wonderful staff!
A. Fossum for helping me with vocal production.
All the brands I endorse for making sure I have all the gear I need;Official Ibanez Guitars USA, EMG pickups, Laney Amplification, Audix Microphones and PreSonus!
My chiropractor, Paul, who makes sure I am always fit for fight!
My manager and singing teacher, Elisabeth Hagen, who was there every minute.