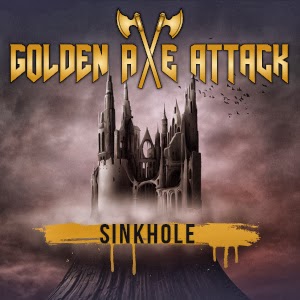 The band, Golden Axe Attack, is pleased to announce the release of their first single entitled “Sinkhole” from their upcoming debut album “March of the Angels”. If you have not heard of Golden Axe Attack, you soon will. They have been wowing audiences for the past year in the New York area.

Golden Axe Attack is a three-piece band with music that can be described as progressive and innovative guitar driven instrumental rock. The music is seriously powerful, yet cerebral. Drawing from varied influences, the result is a powerful amalgamation of rock, heavy metal, eastern music and blues.

The band is led by Arnie Miot on guitar. His virtuoustic guitar playing is on a level that few other guitar players will ever attain. His sound is instantly recognizable for it’s unique voice, gut wrenching phrases and stunning chops.

Arnie is joined by music impressio Doug Grama on bass guitar. Doug’s bass playing creates a harmonic interplay that introduces a progressive new sound that will be setting new trends for years to come.

Drummer, David Weintraub completes the power trio. “David is perfect for this band” Arnie says, “his articulate and propulsive drumming adds to the outstanding muscular and well-oiled machine that is Golden Axe Attack”. David, similar to his band mates, is also well known in the New York music scene.

When emotions run deep and words alone cannot express feelings, music must speak to you universally in its very own essence. Golden Axe Attack captures the unique way of communicating their music to the audience.