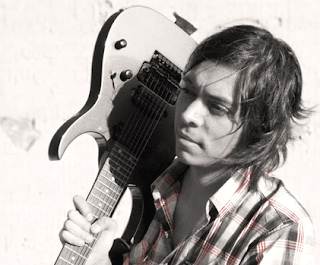 Jorge - Koke Benavides, musician, composer and guitarist, was born on November 14th, 1981. He began as a musician at the age of 13, when he started studying the electric guitar with renowned musician and teacher Mauricio Padilla between 1994 and 2000.

From 2001 to 2004 he studied at the "Instituto Profesional de Música Projazz"  in the field of "instrumental interpreter, majoring in electric guitar."

In 2003 he began to develop his teaching skills by teaching electric guitar privately and at various institutions of Santiago, which he continues to do now. He is currently guitar teacher at the Institute Projazz and Saint George's College.

In 2006 he decided to deepen his knowledge by working with renowned guitarist Emilio García.

He has also composed music for documentaries and theater.

Currently he continues to work with the progressive metal band Octopus, which he has been part of since 2002 as a guitarist and composer. The band has released the albums "Octopus" (2004), "Bonsai" (2006) and "Coda "(2008), and has performed in Chile, Europe and North America. Right now the band is working on promoting their new album "Into The Void Of Fear" (2013).

Jorge is also working on a solo project with drummer Dante González and sound engineer and producer Eduardo Demangel. The project is intended to be released in late 2013.