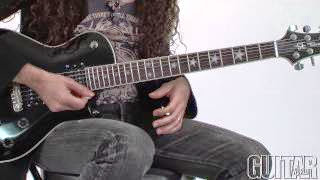 These videos and audio files are bonus content related to the July 2014 issue of Guitar World. For the full range of interviews, features, tabs and more, pick up the new issue on newsstands now or at the Guitar World Online Store:http://guitarworld.myshopify.com/coll...

When it comes to evaluating a musician, individuality is the characteristic that I hold in highest regard. We all have our heroes and favorite players from whom we've learned a great deal through trying to emulate their playing styles.

In rock, for example, most players list Jimi Hendrix, Jeff Beck and Jimmy Page as major influences, and in metal it's not uncommon to hear the names Eddie Van Halen, Randy Rhoads, Zakk Wylde or Dimebag Darrell mentioned as primary influences.

In that sense, many of us have learned from the same sources. The trick is to take those influences and push yourself in your own unique and distinct direction. Though it may be easier to learn other people's solos—which is fine if that's the goal you're pursuing—I believe it's much more rewarding to go out on a limb and take some musical chances, just to see what new and different sounds you can discover in the pursuit of forming a style that you can eventually call your own.