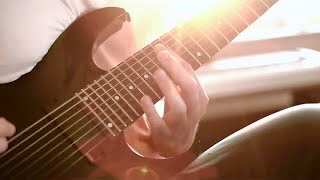 Hey guys! Long time no see. There was kind of break for this channel under the summer due to I being kind of swamped in all these other projects. But as I was working with those, I though it might be fun to finish an old Guitar Pro-file I had laying around with some ideas and turn it into a song and release it. It's been a long time since I released a song all by myself, and I thought it was finally time to. I've worked really hard on this time, I don't think I've evert spent as much time on one song as I have done on this. Most of this time I spent practising. There are some riffs in this one that really challenged me, and I couldn't be more glad that I managed to get it together.

I also really wanted to showcase the new direction in which I want to head. A tad bit more progressive and technical, trying to stay away from the typical breakdown song structure and metalcore scales that were very prominent in the 'Skybreaker' EP. I also really wanted to showcase my improved production abilities since my last effort, as I have really improved myself in recording, editing, mixing and mastering.

I really hope you enjoy this, and if you do, tell your friends about it!

I have another video coming in some weeks that I filmed at the same time as this, so keep on the lookout!

Recorded in Pro Tools 10, mixed in Pro Tools 11
Axe-Fx 2 for all guitar and bass sounds
Steven Slate Drums 4 layered with some custom samples through Kontakt for drums
Zombass 3 for bass
Xpand2 and Mini Grand for most synth/electronic stuff


As promised, the full tabulature for our single "Contagion", available here, both in GP5 and PDF-format:

Give us a like on Facebook: https://www.facebook.com/pangaeaofficial
Listen to us on Spotify: http://open.spotify.com/album/5QKglVl...
Pangaea - "Contagion" Guitar Playthrough


Volumes - "Edge of the Earth" Instrumental Cover by Dennis Martensson