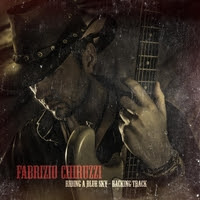 Italian based guitar player, Fabrizio started his music career in the october of 1995 at the age of eighteen. In 2000 he won an electric guitar competition promoted by Hard! magazine and played on stage with Steve Vai during the Ultra Zone World Tour. In 2001 He released his first demo cd called Gates of Doom which obtained enthusiastic reviews by the music media. In 2008 He released a b-side project called Revangel. It was an instrumental industrial shred metal and the title was: the awakening.

During the years he was a clinician for music shops as well as an endorser of the Di Marzio pickup company. He also feature in other musicians works as Matt Cafissi, Marita Pauli, Psycophonic compilation and various pop artists.

In 2015 he released the first track of the upcoming digital album called "fire walk with me". Which will be released song by song over the year.
His genre is a rock based sound with influences from new age/chill out music to heavy rock and metal.