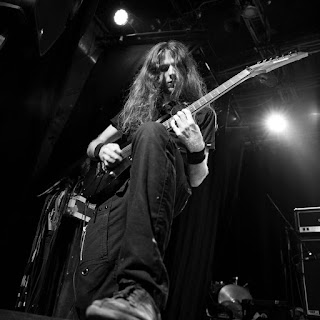 Though the songs were already killer when I started mixing them, I decided that since more IS more, I wanted to add choirs to some of the choruses... BIG choirs! I called up a bunch of friends and together we recorded insane amounts of backing vocals - some of the songs have an excess of 300+ tracks of vocals!!!

Also, this album marks the first time in all recorded history of the world that I contribute with a guest synth solo! It's not as fast and sophisticated as some of my guitar work because my chubby little sausages for fingers won't operate as efficiently on the keyboard...

Anywho... now we'll all just have to sit and wait tight for Christian to get this slab of melodic sex metal released!

Anybody didn't know that already)....The dude put as much hard work and dedication into this album as he invests into his own music to make it sound the best it could possibly be. And this album will contain a very special guest solo by Mr. Nilsson himself, not on guitar this time, but on the keys, which is mega cool. It was a lot of hard work, but I'm super proud and happy with the result. This is the album I always wanted to make since more than 15 years and is, at least right now, my favorite work I've ever done.

Thanks to Ian Parry, Jimmy Pitts, Linus Klausenitzer and Hannes Grossmann for your fantastic performances on this album, and to all my Swedish friends for lending your talents for the backing vocals and choirs. I can not wait to unleash this record on the world!