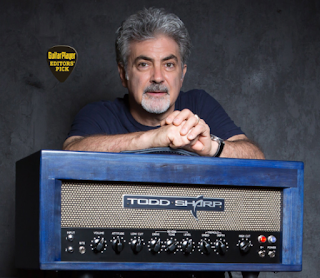 
May 10, 2016, NASHVILLE, TN…Todd Sharp Amplifiers announces they will be exhibiting for the first time atSummer NAMM 2016, June 23-25 in Nashville, TN at booth #1255. Launched in Feb. 2016, by renowned guitar player Todd Sharp, the amp company is already generating A-list clientele, rave reviews, and a Guitar Player Editors’ Pick Award, the highest honor from the publication. Sharp will be present at the booth throughout the expo and provide exclusive offers on his flagship model the JOAT 20RT (Jack Of All Tone, 20 Watts, Reverb/Tremolo) and his newest model the JOAT 30RT for attendees.
The high-end, hand-wired vacuum tube amps are the first of their kind from Sharp, who has 40+ years performing from studios to stadiums. He has played with numerous artists, including Hall & Oates, Rod Stewart, Fleetwood Mac’s Christine McVie, Mick Fleetwood and Bob Welch, Delbert McClinton, Carlene Carter and many more. Through his years of performing experience Sharp had yet to find the perfect amp, so he decided to build one.
Early admirers of the brand include Vince Gill, Steve Wariner, Mick Fleetwood and John Oates, who is using the JOAT 20RT on his national tour with Daryl Hall. Todd Sharp Amps recently moved their headquarters to the Berry Hill neighborhood of Nashville.
"After knowing and playing with Todd Sharp for many years I was anxious to try his new amplifiers. They are everything I hoped for and more. Very versatile and constructed to a very high standard technically. The Jack of All Tones (JOAT 20RT) delivers exactly what it says...it’s now front and center as part of my Hall & Oates touring stage rig and I can't wait to get it into the studio as well." – John Oates
"I love my JOAT amp by Todd Sharp and all of its cool features. It is extremely versatile, uniquely designed and is simply beautiful." — Four-time GRAMMY Award winner Steve Wariner

Founded in 2016, Todd Sharp Amplifiers are handcrafted in Nashville, TN. The debut model the JOAT (The Jack of all Tones) 20RT head and Model A Speaker Cabinet are now available. With the accumulated wisdom of 40+ years as a first call rock & roll guitarist including the last 20 polishing tone for an impressive clientele with Nashville Amplifier Service, Sharp brings unique experience and expertise to Todd Sharp Amplifiers: “Amplifier Design by a Real Player for Real Players.” From aesthetics to chassis layout, to mil spec rotary selectors and pots, aircraft grade isolation mounts for the first stage 6AU6 pentode and dual Reverb tank design, custom spec transformers, point to point hand wiring with 19 strand Teflon wire, stainless steel hardware, and a painstaking process of selecting each component for optimum performance, the JOAT amplifier series deliver from Fingerboard to Baffleboard.