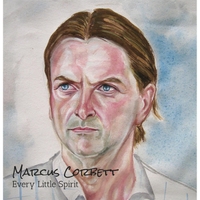 London, UK – Much to the anticipation of music aficionados worldwide, music artist Marcus Corbett will be releasing his new album “Every Little Spirit” in October 2016! Marcus is an acoustic guitarist, singer and composer based between Marlborough, UK and Pune, Maharashtra, India. Gradually, during repeated expeditions in India over the last decade or more, having immersed himself in the fundaments of North Indian classical music Marcus has begun to reap the rewards of his involvement in the musical life of Pune, Maharashtra and Gadag in North Karnataka.

The result is a generous spirited cultural collaboration that allows his music to come to life while paying homage to the tradition he loves. Here there is ambition as two violins are at work, and as he says, “One violin may be a line drawing but two become cinema – and with the risk associated with such potential drama no one performance is the same as the last. The beautiful challenge in this search is to keep the individual cultural charm, to make the bell ring true. And to maintain the power and integrity of the music.”

“With his deep affinity with Indian classical music and his expertise in soulfully conveying its essence on the humble acoustic guitar. …where other guitar maestros have dipped their toes…. he's taken the integration a stage further and his collaboration with tabla virtuosos Nitin Gaikwad and Sharanappa Guttaragi on this disc is both fiery and rewarding.” - Fatea

On the subject of his musical influences, aside from his times in India, Marcus states, “I've been affected by John Martyn, Nick Drake, Roy Harper - anybody that makes the guitar sing or speak. John McLaughlin with the early Mahavishnu Orchestra and Shakti was a revelation as has been Jerry Garcia's soulful musicality. Recently Frank Yamma has got under my skin”.

Acclaimed producer and composer Sam Williams (Supergrass/The Go Team!) has co-produced the first track on the album, “Strung Deep” – a remix of Castanets from Marcus' previous EP release of the same name. Marcus explains how this unlikely-seeming collaboration came about:

“While mixing 'Castanets' for the last record (Strung Deep) I discovered a heartbeat in the rhythmic cycle that expressed something quintessential and more about the track. It has a breezy optimism that continues from where the album 'Strung Deep' left off. I needed a different approach, someone outside of the Indian classical world who could the sense the potential and produce it. A chance meeting with Sam Williams during which I heard some of his recent work was the catalyst to our working together. Sam has created a great rhythm led track to fit the varying time signatures and give the looping swirl a kick. He also found some words to go with the emerging vibe while keeping some essential ingredients of the original. It is a remix which contemporizes the song in a way which keeps the flavour of the original and casts new light on what I do”.

Recorded with Abhijit Saraf at Musical Stars Studio in Pune, Maharashtra; and in Gadag, Karnataka and in Oxford (UK), Corbett is accompanied for “Every Little Spirit” by tabla players Nitin Gaikwad and Sharanappa Guttaragi. The seductive vocal of renowned classical singer Saylee Talwalkar takes us into his world. The storyline unfolds amidst the masterful weave of bansuri flute player Milind Date, and is carried further by the cinematic violins of Anjali Singde-Rao, Sanjay Upadhye and Sachin Ingale with a cameo appearance by celebrated Oxford-based virtuoso Bruno Guastalla on cello.

Comprised of eight tracks spread across 59 minutes, “Every Little Spirit” is lyrically themed and is a reflection upon how our roots entwine with all life; how our joy and sorrow is shared; that while life is a gift, for which acknowledgment and thanks are due, no one said the living of it was easy and how we instinctively seek release, to “get set free” from the emotional and physical turmoil of existence. “This could be you, this could be me….”.

“Perfect Sunday morning music... I really enjoyed listening through it - it is a very well paced and interesting listen” - Nigel House at Rough Trade

Having toured successfully in Germany and Holland, played around the UK, and gained press attention from all over the world for his previous releases, Marcus' reputation for his skillful combining of the worlds of Indian Classical and British folk music, while being ambitious and yet aware of the limitations, will inevitably continue to grow and grow, and his status as one of the great explorers of these musical borderlands will continue to be celebrated.