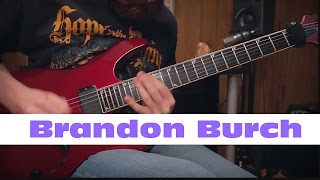 The past few weeks have been lots of writing and recording. I have lots of unfinished songs but this is one I'm for sure going to finish. I've been listening to a lot of players like Andy James and Intervals the past years, and so I'm finally ready to release a track worldwide where the guitar solo tells the story. I've attempted at such before, but I feel this will surpass all I've done thus far. There were passages I heard in my head which I had to practice slowly to be able to play at full speed. That very fast scale in the middle is an example. With practice it finally clicked. It's still challenging, and strangely enough I have to keep myself from playing faster than the 190 BPM required. ----------------------------------------------- This video was made possible by my supporters on Patreon. Special thanks to: PS. ▼ Support me on Patreon! ▼
http://patreon.com/brandonburch ▼ Connect with me & my band! ▼
Brandon's Instagram ▻ https://instagram.com/brandondburchDrummer's Instagram ▻ https://instagram.com/dano14svt/Drummer's YT ▻ https://www.youtube.com/user/DANOA7X2009Facebook ▻ http://www.facebook.com/analyzedwithinBand's Twitter ▻ http://twitter.com/analyzedwithinDrummer's Twitter ▻ https://twitter.com/ortega1117