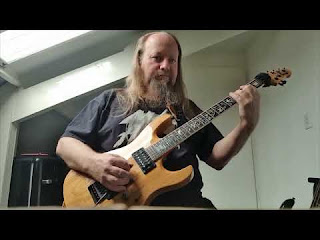 Hello everyone, hereby a new playthrough video for you guys, this one got requested many times so I decided to make it ;)

I replaced the video, since the previous one I forgot to mirror, since I am not lefthanded ;)

The original song can be found on the very first album of the band Lemur Voice called "Insights" which came out in 1996 by Magna Carta.
I had to re-learn a few phrases of the song, since it is a very long time that we played it live since Lemur Voice disbanded in 2000 ;)

It was fun to record this one, it has many different pieces, and the riff in the beginning of the song has a story ;)

We were recording "Insights" in Waalwijk in the RS29 studio with Oscar Holleman. When I was recording the intro riff Arjen Lucassen (Ayreon) came into the studio, I recognized him also from Vengeance (where Oscar also was playing guitar in ). He came to pick up something and he complimented me on the guitarriff: "Gaaf loopje"
This is how I got to know Arjen, the rest is history :)