Background:
Andres Osorio Toledo started playing at the age of 9. When he was 13 he took private lessons for five years with the best colombian guitarist at that time, Juan Carlos Ramirez- Knuto. He studied at the "Academia Latinoamericana de Guitarra" where he had four years of classical music training. He also attended several guitar clinics by players like Richie Kotzen, Jennifer Batten and Calentano techniques.

At 18 he took up playing the oboe. He also studied harmony and jazz improvisation, and taught jazz harmony and special rock guitar techniques at the Universidad Unilatina for two years. During this period he wrote the "symetry for scales and chords that doesn't belong to a progression", "Chromatism between modal systems and regional scales" , "Alternate Picking Mode", "Exotic Linal Chords", "Stretching Legato" for a book released in 2004.

In 2001 he signed a contract with Washburn and recorded/produced a CD called "The Burning Glass Project" .

Check out his CD at CD baby: My World 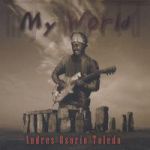