News: shredding across the world

From the raw emotion of the live intro by Anders Bosell, to the over-the-top, string-skipping licks of Rob Johnson closing out the CD... Shredding Across The World: Volume 1 smokes! In between we have great songwriters like Tore Moren and Steve Burrows who can shred it up, along with metal band veteran Darin J. Moore. Michael Harris offers up a very creative piece with his brother Brian Harris going crazy on the drums, while Eternal Fantasy's Hitoshi Nakamura really gets the CD going early on track two. Eight-string monster and MySpace legend Marian Gradinarski gives us a Watchtower inspired track, Tom Kopyto treats listeners to a "great chops" lesson, and up-and-coming stars Michael Abdow and Steve Shannon show us that shred is not lost among the youth. There is much, much more... there is something here on this CD for every fan of virtuoso guitar! 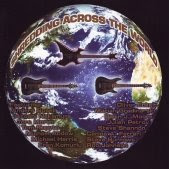