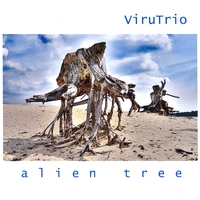 This is the second album for the ViruTrio. While maintaining the direction of the first CD they are more effective. The soul of rock merges with Latin rhythms and the work of the three musicians make good fusion of "Rock Blues in crossover Latin Funk" defined by themselves. Lorenzo Fonda on the drums and percussion, Romano Baldassi on the bass and Antonello Catanese on the guitar, author of most of the themes, they have an harmony that is reflected in their tracks that are particularly affect by composition and arrangement.

Besides the excellent work by the rhythm section of Lorenzo and Romano resulting in very interesting solos in Big Cake and Cubika a particular note goes to the guitarist, Antonello, which, compared to the first CD, in which especially the guitar sound does not fully exploited his expressiveness and touch, this CD showcases an excellent sound, very particularly that gives the "fullness" to the trio. Waitin 'for the collapse and the blues Fat dogs are illustrative of the sound of this trio. Chrysalis and Seed breaking the trend of the CD by tapping a tours in the ethnic world with the first and in th second with the rarefied image. Well, surely a good job that we hope will continue in this direction by consolidating a trio since its debut a few years ago, and has original music, which is not always obvious, interesting. Advice that we woud give to the group: play live as possible !
Antonello Catanese new cd