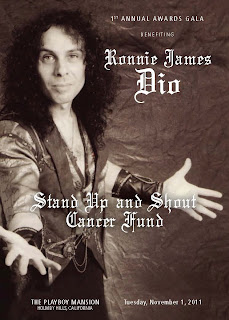 AT PLAYBOY MANSION ON NOVEMBER 1ST

The Ronnie James Dio Stand Up and Shout Cancer Fund, founded last year in memory of the world-renowned voice of Dio, Black Sabbath and Heaven & Hell, will host its first Awards Gala on Tuesday, November 1 at the Playboy Mansion in Los Angeles. Awards will be presented to six distinguished honorees for their contributions to spreading awareness of Fund's important work.

A privately funded 501C3 charity organization dedicated to cancer prevention, research and education, the Ronnie James Dio Stand Up and Shout Cancer Fund has already raised more than $500,000 in its short history. Monies raised have been committed to the cancer research work of the T. J. Martell Foundation for Cancer, AIDS and Leukemia Research and the gastric cancer research unit of the M.D. Anderson Cancer Center in Houston, where Ronnie was treated for gastric cancer during the last six months of his life, according to Wendy Dio, widow of the late singer and Fund President/Founder.

The event at the Playboy Mansion will include cocktails and gourmet food stations created by renowned chef William S. Bloxsom-Carter, a silent auction and a performance by the rock band Asia featuring John Payne. Guests will be treated to tours of the Mansion grounds and world-famous grotto.

Eddie Trunk of VH1 Classic's "That Metal Show" will serve as Special Guest emcee. Awards named after songs written by Ronnie James Dio will be presented to the following honorees:

* Man on the Silver Mountain Award: Tony Martell, founder of the T.J. Martell Foundation, which has funded innovative medical research to find cures and treatments for leukemia, cancer and AIDS for nearly 40 years;

* Stand Up and Shout Award: Rita Haney, a tireless fund-raiser, Founder of Dimebash, in memory of her husband "Dimebag" Darrell Abbott.

"Ronnie would be proud to witness the legacy he's left behind," says Fund chairman Gloria Butler. "Sadly, we've all known people that have suffered this cruel disease, cancer. Most of us have lost loved ones far too early. If only...if only there was more money for research to be able to find cures for all of the cancers. Maybe someday people will be able to reflect on how their ancestors strived to make a difference in finding a cure. What now seems like a fantasy may prove to someday be a reality.

Information regarding the Fund as well as tickets and sponsorships for the November 1st Gala is available at the organization's newly-launched website:www.diocancerfund.org
Ronnie James Dio