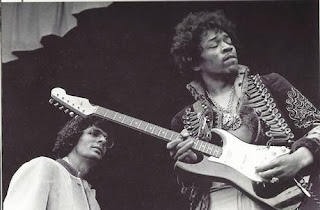 According to the Independent Newspaper, a valuable guitar that Jimi Hendrix was seen to douse in lighter fluid, smash to pieces and set fire to on stage in 1967 will go on sale next week in one piece, and without any signs of scorching. It is expected to fetch £125,000.

Unknown to the crowd at the Monterey festival, outside San Francisco, Hendrix had switched his “favourite” black Fender Stratocaster for another instrument just prior to his dramatic display of flames and rage during a rendition of “Wild Thing”.

Not wishing to be outdone by The Who’s Pete Townshend who had performed first and smashed up his guitar, Hendrix opted to set his axe on fire so as not to be accused of copycat behaviour.

He requested some lighter fluid but couldn’t bring himself to destroy the Strat and so swapped it secretly for a less valuable instrument.

The Fender Stratocaster continued to be used on Hendrix’s American tour (his return to the States after moving to the UK in 1966 to make his fortune). It later fell into the hands of his record company managed by James Wright.