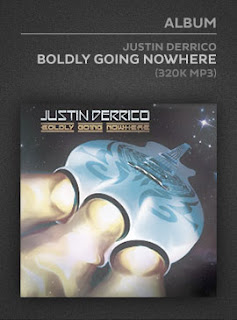 BOLDLY GOING NOWHERE ALBUM
Justin Derrico is one of the most talked about guitarists in the music industry right about now. The 28-year-old New York native has toured all throughout the country, lending his dynamic skills to popular artists such as Pink, The Calling, Lil' Wayne and Robin Thicke. Although his debut album suggests that he is 'Boldly Going Nowhere,' the truth is Derrico is on the fast track to being a legendary guitarist. Throughout this instrumental 10-track collection, the innovative musician incorporates a bluesy vibe into his eccentric modern rock style. That is captured on songs like "Fricken Chicken," "Goodnight Nurse" and "Manic." There are also lighter records like "Easy Days" that'll fill the needs of the adult contemporary audience, and a Phil Collins cover of "In The Air Tonight," the latter of which features a computerized vocal rip. Derrico might claim to be 'Boldy Going Nowhere,' but it's clear that he is going somewhere and that somewhere is in the right direction.