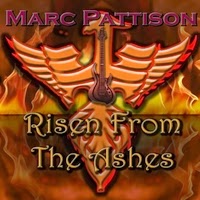 Marc Pattison - Risen from the Ashes

Ex-Circle II Circle Guitarist and current Futures End guitarist, Marc Pattison has been writing and recording for almost 3 decades. This is the most recent group of instrumental guitar songs he has completed, his most ambitious and technically proficient work to date. Included are two cover songs, Marc's take on Benny Goodman's version of the 1920's swing classic "Sing,Sing, Sing" and a metal version of the 80s classic by Debroh Harry/Blondie, "Call Me".

Risen from the Ashes