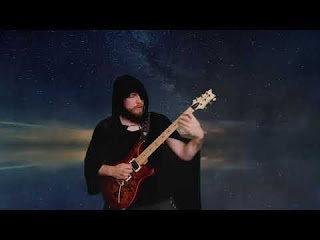 This is a performance of 'The Legend of Vǫlva', composed by Rob Heaven.
The Legend of Vǫlva is a fictitious account; inspired from a love of Folk, Celtic New Age, and Symphonic Metal - moulded into a fusion of genres. Furthermore, this composition is 'Chapter 2' of a currently incomplete series of scores which complete a story written by Rob Heaven.

After an epic telling of 'The Legend of Dargoroth', Rob was visited once again - this time by Sorceress Vǫlva, who expressed dismay towards Dargoroth's recollection of events. Vǫlva revealed alluring tales of her early life; including the injustice faced at the hands of Chieftan Mensai's regime, and events leading up to Vǫlva becoming a highly revered sorceress. Rob vouched to retell Vǫlva's story through a cinematic performance art experience. Similarly to Dargoroth in the previous chapter (Chapter 1: The Legend of Dargoroth, 2020), it is believed that Vǫlva's spirit is trapped within this realm until her story be witnessed by mortals. Only then, can her spirit ascend to a peacefuly eternity.

This performance reveals the story of Vǫlva – a formidable sorceress whom’ many warriors seek, desperate for magical powers to be bestowed upon them. The tale begins with Vǫlva as a young girl living on a farming village amongst a family of peasants. During one chaotic night, Vǫlva’s village is raided by Mensai and his Dragonwolf army. Stripped of all valuables, the farmers gathered in the village tavern to discuss their vengeance. The village chieftain delivered a motivational speech, and the survivors agreed to march into the Mensai's lands to claim justice.

However, the farmers are no match for Mensai's army, and are brutally slain in battle. Months passed, and the farmers did not return. With her heart set on avenging her loved ones - Vǫlva left the village behind her, and adventured into the depths of the undiscovered country to cultivate her magic. After a long treacherous journey, Vǫlva arrived at an ancient magical forest....