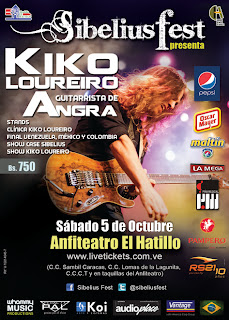 - Live Grand Final between guitarists of Colombia, Mexico and Venezuela.

They just wait: They're for sale tickets for the Sibelius Fest 2013 to be held on October 5 at the Amphitheatre of Hatillo from 1p.m., with the starring role of Kiko Loureiro and his trio and Sibelius where the band also premiered the songs from his new album. On this feast of the electric guitar guitarists Jorge Fajardo of Venezuela, Enrique Ibarra of Mexico and Felipe Manrique of Colombia will be measured to find which is the new idol of the guitar in Latin America.

Felipe Andreoli is considered one of the best bass players throughout Latin America and also among the most prominent in the world and is endorsed as Bass Player magazine and other publications. Andreoli is also bassist of the band Angra so with Kiko Loureiro fans enjoy two members of this group a favorite of Venezuelan public.

Meanwhile Bruno Valverde is known for mastering different techniques for battery have allowed venture into the rock, to jazz and Brazilian music.Valverde has played together with Eloy Casagrande (Sepultura drummer) and conducts workshops and master classes for brands battery Pearl Drums, Cymbals and Batera Anatolian Clube. It also has proven experience in the stream of jazz fusion.

Andreoli has come to play twice in Venezuela with Angra and declare his last visit:  "I like playing in Venezuela Venezuelans because our fans are very warm and delivered and appreciate our music. I have fond memories of the two concerts that we have in this country. "

"It is a great pleasure to present this great final guitarists Colombia, Mexico and Venezuela, with a special guest from Brazil, which shows how this idea was born and settled in our country now have impact on Latin America. We are sure the audience will enjoy a great event, with guitarists who play a variety of styles and trends for all tastes " said Philipp Scheer, guitarist and creator of Sibelius Sibelius Fest.

"I had the opportunity to work with Angra in the two opportunities that came to Venezuela and I can say that Kiko Loureiro has always been a great musician, very professional and delivered with your audience, it is also an excellent teacher, those who participate in clinical learn a lot from him. It was always our first choice as a special guest of Sibelius Fest, even though we were evaluating options of other guitarists in the U.S., Spain and Latin America, always wanted it to be Kiko and thank God we realize their participation " , said Roberto Palmitesta, Press Officer and other of Sibelius Fest organizers.

The live finale of Sibelius Fest, Latin Edition 2013, will also feature a variety of booths where recording studios, audio companies and different brands can show the public their products and services.