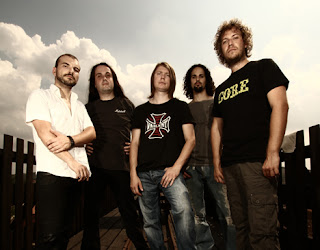 Italian progressive metallers Twinspirits who released their third album "Legacy" on Lion Music in February 2011 have made available a number of special "making of" videos on YouTube to give fans an exclusive peak behind the scenes of the albums creation.

Twinspirits keyboardist/composer Daniele Liverani worked his way through over 150GB of recorded footage to produce the following clips.


LEGACY PICKING UP POSITIVE PRESS
“Legacy” is being widely hailed as Twinspirits best work to date with some selected comments:

5/5 at http://www.ytsejam.com
"Like contemporaries Circus Maximus, Sun Caged, and Mind's Eye, Twinspirits have created the template for modern progressive metal - instead of playing by the steadfast symphonic rules, they don't walk on thin ice or turn their music into an emotional train wreck or conjure up a concoction of overzealous vain ridden solos that go nowhere - there is catchiness, tough riffs, hook laden arrangements, and the passionate technical tinge that all makes this album something exceptional, as there is a lot for those whole the musical scheme of things and there is a lot for those who love 'songs' as well."

96/100 at http://www.virtuosityone.com
"Daniele Liverani is well known for his grand visions (‘Genius Rock Opera’ anyone?) but with Twinspirits he seems to have found his niche, delivering creating intelligent, mature and enjoyable metal all performed to virtuoso levels by all involved. "

9/10 at http://www.metalperspective.com
“Legacy” is an album that will speak to the ears and hearts of every progressive metal fan. Liverani is an unrest musician and composer and has led the Italian progressive metalers to a fresh album of elegant progressive/power metal."

4.5/5.0 at http://www.dangerdog.com
"Once more, on Legacy, Twinspirits delivers an ambitious, intriguing blend of melodic and heavy progressive metal. Thanks to a settled line-up, Twinspirits is hitting their groove. Strongly recommended!"


86/100 at http://www.powerofmetal.dk
"Twinspirits is moving towards the major league with this album and "Legacy" is a clear move in the right direction both soundwise as well as musically."

4/5 at http://www.friday13thmetal.co.uk
"This album features 11 tracks of operatic at times Progressive Metal and with this album have a 30 minute epic split into 5 parts entitled 'The Endless Sleep' is a masterpiece in it's own right”

Order online and full information on "Twinspirits - Legacy" can be found at
﻿http://www.lionmusic.com/cd/legacy.htm﻿