Plus much more live show footage from Flint himself at http://www.youtube.com/user/flintblade, including this one...


Flint Blade also reminds me that HawkBlade has got a few fun things happening this month with a radio interview on NPR, on "Folk and Acoustic Music" doing an interview and playing a few songs live on the air.

12-01-2007:
Flint is on MySpace: http://www.myspace.com/flintblade
Plus a whole lot of double neck two hand tapping video arrived on YouTube courtesy of Flintblade...here's an example


Plus you can also get his new CD "Introscope", released in October 2006 ,from CD Baby. 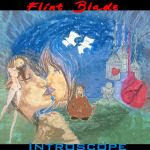 Background:
Flint Blade, great name...but I digress. Flint was born in Fort Lauderdale, Florida into a family dominated by art and music. He got his first guitar at the age of fourteen and was taught initially by his dad. He got some professional lessons wih Steve Afrogola. The after seeing Michael Bianco he took two-handed tapping lessons with Michael. Michael encouraged Flint into desiring a 14 string guitar. After a time he got Bob Mason next release of the T-14.

This is an example of one of his guitars, but check out his photo gallery

"Tapping involves producing notes by tapping percussively on the guitar strings with both hands directly above the fretboard. In effect, playing a guitar this way is really more like playing a piano, in that it enables the musician to play both rhythm and melody lines at the same time, or melody and harmony, or bass and rhythm, or sometimes all at once."

Check out his web site for a more complete bio

See flint playing live on the T14 on his video page. If your impressed you can buy his "Custom Standards" CD on line.