Jean Baudin has also completed an instructional book. The book contains CD samples from the exercises in the book which will be $30 + $5 for shipping.


Every Breath You Take


Background:
I know your asking yourself how did a bass player sneak on to a guitar blog site...well I don't know...all I know is it has a lot of strings and looks a bit like guitar...Jean Baudin is one of the earliest pioneers of the 9-string bass (guitar). His current band is called Nuclear Rabbit.

Jean's band has been on stage with System of a Down, Papa Roach, Alien Ant Farm, Deftones, P.O.D., Linkin Park, A.F.I., Green Day, Mindless Self Indulgence and Bad Brains.

Jean is currently working on a Solo CD that will feature solo pieces on 9, 11 and 12-string basses. He also has an instructional book/dvd in the works for tapping on 5-string basses.

photos of his monsterous 11 lava bass: 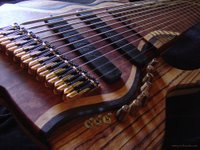