on February 06, 2010
Eugene “Jin” Mischenko is from a Russian group check out : http://jin-guitar.com warning tasty playing alert on this CD! 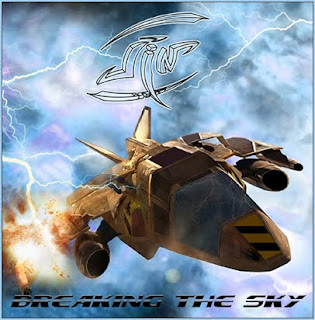 At the beginning of fall, the new debut album of a talented guitar player Eugene “Jin” Mischenko
was released. “Breaking the Sky”, the name of the album that symbolizes loud and fast appearance on the top
of the music Olympus the new generation of the guitar masters. Eugene “Jin” Mischenko, is one of the founders
of last year’s Miriada Project, that was one of the most talked about, and received a lot of positive reviews as
well as in musical ideas and their execution. This year, Jin decided to give us his first solo album that promises
to send its listeners into a 40 minute travel inside the world of melody, romance, anxiety, speed, emotions, and
science fiction. During the recording of his debut solo album, practically all work was done by Jin himself…
solos, riffs, bass, keyboards and drums. On some tracks, he used the help of the bass guitar player, Aleksandr
Podoroga, known by his work in Miriada. Keyboard tracks and pianos were recorded by Aleksandr “Wish”
Andruhin. Riffs for the Phantom track were recorded by Anton Mironkin. Mixing and mastering were performed
in Die Records Studio by one of the best sound engineers, Eugene Vinogradov (Catharsis, Butterfly Temple,
Forgive-me-not). With his performance, Eugene Mischenko proves that instrumental music in Russia takes a
new beginning, a new spin, a fresh breath. It’s promising and essential. The album was released September 3rd,
2007 on Iron LTD.

To order album from Jin: