Steve Vai: super round up

Hey folks.
First of all, I miss you. It seems as though I have not been on tour for way too long.
Well, I'm working on that.
I was hunkering down on the new project when I got a call from a friend of mine at Universal to play guitar on "Stairway to Heaven" for Mary J Blige. I thought, hmmm, this could be dangerous but challenging. So I went into the studio and we cut a track with Travis Barker on drums, Orianthi on guitar, and Randy Jackson on bass. The track came out beautiful but perhaps the highlight for me was sitting across from MJB, just her and I doing the classic song’s intro. It was magic really. Her voice sounded like moonbeams reflecting off of a mountain lake.

Then I took the track home and started to imagine the guitar arrangement I was going to do. It's a difficult song to record. Not because the original part is hard to play but because it's so perfect as it is, but I didn't want to just play it as it is... why? But how do you build on it without being disrespectful?
The last time I played this song I was 14 years old and it was at a high school dance in the gym, and while I was doing the extended solo section the head cheerleader for the football team threw up all over my 4 inch 1974 teenage platform shoes. I'm hoping this new version doesn't have the same effect on people.

Anyway, I just felt that if I approach the guitar parts with love, respect, humility and great admiration all the right things will just happen. I started to put a guitar part together and I must say that it's coming out much better than I could have expected. I hope you like it when it's done.

Besides that I'm very excited about VaiTunes. I have so much material in the vault, this is a good way to dust off some tracks and get them out there so they don't die and go to digital heaven.

We are all so thrilled with the success and the feedback from Where the Wild Things Are DVD. It's a home run for all of us in the Vai camp. We went gold in the USA and Canada!

I'll be working on the new record until May. I have a title and a full layout of all the songs. In May I have to stop whatever I'm doing and lock myself up somewhere to start composing for the Symphony project in Holland in October 2010. I suppose it will take me 4 months of 16 hour undisturbed days to complete the compositions. This is another reason why I am working to release a VaiTunes track once a month if possible.

You'll be hearing more about this orchestra project but for now I would just like to give you some of the working titles for the compositions. And as you know, things can change.
Pastel Vignettes
Brutal Beauty
The Middle of Everywhere

I'm so thrilled about this orchestra project I can hardly contain myself. I already started to sketch out some of the compositions.

Wishing you all the best. Enjoy the coming spring.
Peace and love and good happiness stuff. 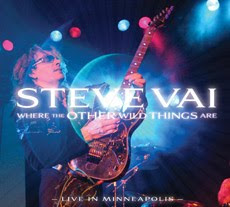 On April 13, Favored Nations will release Where The Other Wild Things Are on CD and digital download. The album is the official companion CD to Where The Wild Things Are and features 12 tracks from the concert that didn't appear on the first CD. The album comes in a beautiful digipak, while the download comes with a PDF booklet.

Where The Wild Things Are is also available as a digital release worldwide through your favorite online music retailer, and comes with a digital booklet.
Steve Vai