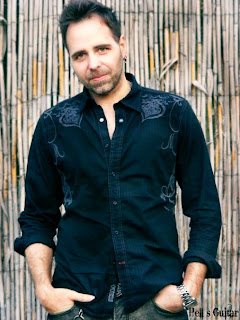 I saw saw Dave Martones clinic in Romania and it was excellent and well worth attending. Lots of hint s and tips delivered in style and with great humour! Get to see him play... you won't be disappointed.

To listen to the music of Dave Martone is like experiencing an explosion of sound, color and flavor simultaneously. Sometimes over the top, sometimes minimlistic, sometimes a mixture of the both, Martone never ceases to amaze with his talents on the instrument.

Daves discography is large with 6 studio albums out and 2 live concert DVD's as well as countless compilation albums to his credit. Dave has been on the cover of Muzik ETC and GONZO magazine in Canada as well as having major features in Guitar Player, Guitar World and Guitar One Magazine where Dave was voted one of the top 4 underground shredders in North America!

Dave has toured with Joe Satriani for his 2011 Wormhole tour in support with his group Martone. Dave has also performed at large guitar festivals in Romania and Armenia with shows also throughout Italy.

His latest record "Clean" has been signed to New York record company Magna Carta and finds some of the most talented guitarists of our time on it as special guests with non other than Joe Satriani playing alongside of Martone. Speaking of Satriani, Dave has just finished the 2011 Western Canadian tour in support of Satriani's new album. Dave has also done a series of special guitar videos with Workshop Live in the USA as the host of "The Satch Zone" with Joe Satriani.

Dave's work goes far also as a session guitarist for major record companies such as Island, Def Jam as well as owning his own production facility in Vancouver Canada "Brainworks"