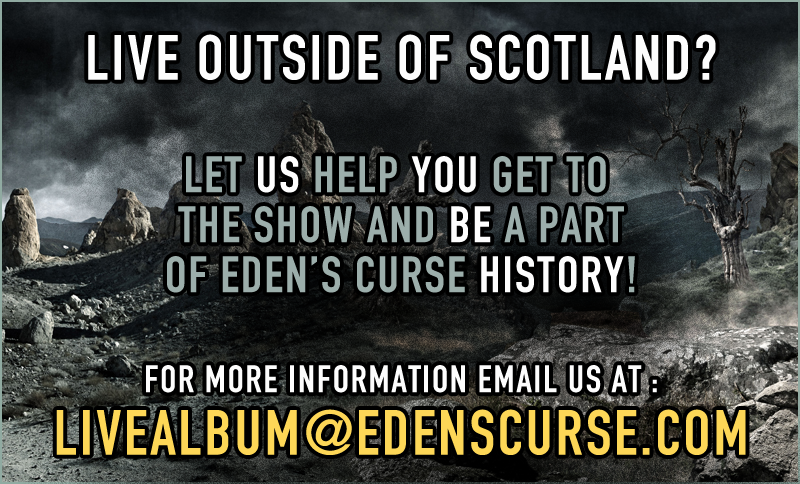 The group are thrilled to announce their return to Scotland's largest City on Friday 28th November for an extra special exclusive one off UK show at the Classic Grand to record their first ever Live Album for AFM Records. Band band bassist and local boy Paul Logue beams "We are very excited about it and we love playing Glasgow! It's one of the most popular Cities on all our runs and every time we have played we have had a great reaction".

The band have also confirmed that Swedish Melodic Metallers ColdSpell will be their specially invited guests for this extra special show. Paul adds "I've been good friends with Micke and the boys for a while and this is something we have tried to make happen for a long time, so (we are) delighted for that".

The band are also offering their help to all Eden's Curse fans considering travelling to Glasgow for this extra special show, to be a part of the bands history, as Paul explains : "I encourage Eden's Curse supporters all over the world to travel and we are going to help you do that. So if you are out with the Scottish region and you want to come to this show, then email livealbum@edenscurse.com and we are going to help you alleviate some of the issues of getting into the show. If you can show dedication on your part then we will repay it back".

We are aiming to make this a performance like no other and we are working on some very special surprises. Now we are doing things bigger and better, so together, let's make this a night to remember" he adds.

Tickets are now on sale via http://t-s.co/eden0 or www.classicgrand.com
For more information visit www.edenscurse.comEden's Curse return to Glasgow on FRI 28TH NOV to the Classic Grand to perform and record their first ever live album for AFM Records with specially invited guests ColdSpell from Sweden.