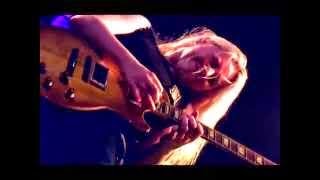 Thanks to Vincent Lyons

From soulful, perfect tone blues notes, to explosive, jaw dropping guitar soloing, Joanne Shaw Taylor set the stage on fire, when she delivered a superb set of music, during the SR&BB blues night at the MEZZ venue, in Breda, the Netherlands, on Friday, October 10th, 2014. More band details to follow.

From Wikipedia: Dave Stewart heard Taylor play, and in 2002 invited her to join his supergroup, D.U.P., on tour in Europe. In May 2009, Taylor released her debut album, White Sugar, on Ruf Records. Taylor's second release was 2010's Diamonds in the Dirt, also on Ruf Records. Both her albums peaked at number eight in the US Billboard Top Blues Albums chart. In 2010, she won Best Female Vocalist at the British Blues Awards. She won the same award at the 2011 British Blues Awards, plus the Songwriter of the Year award for "Same As It Never Was" from Diamonds in the Dirt. On 4 June 2012, Taylor played lead guitar in Annie Lennox's band at the Diamond Jubilee Concert in London. Taylor played an extended solo during the performance in front of Buckingham Palace, attended by approximately 12,000 people (not counting the many thousands lining The Mall). Just before her solo spot, Taylor's fuzz phase pedal malfunctioned, leaving a much cleaner guitar sound than usual. This apparent misfortune was ameliorated, however, when she was informed that Stevie Wonder had loved her "clean, bluesy, understated tone". Taylor's fourth studio album, The Dirty Truth, was recorded in Memphis, Tennessee with producer Jim Gaines, and was released on 22 September 2014.