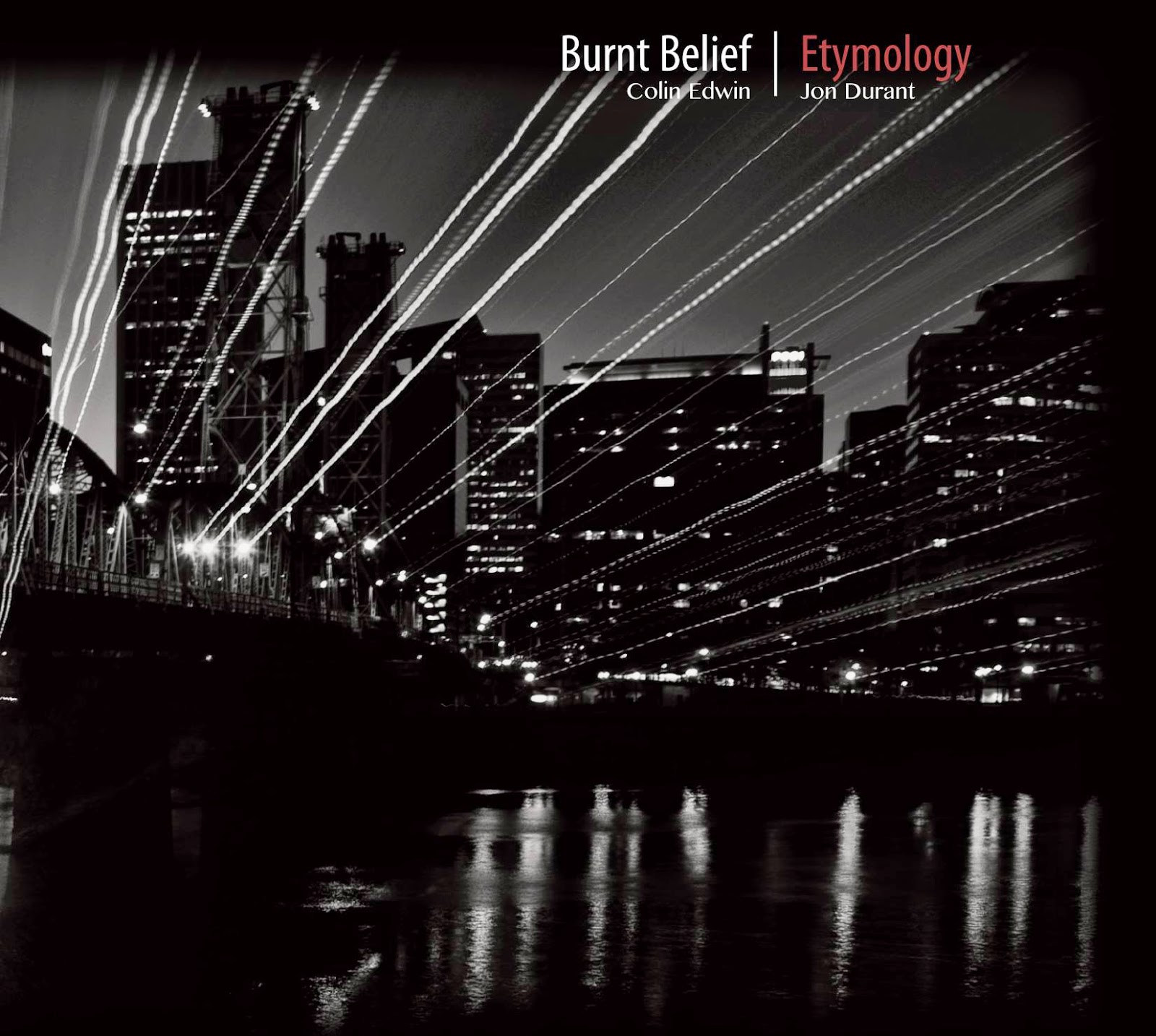 COHASSET, MA - World-renowned bassist Colin Edwin (Porcupine Tree, Metallic Taste of Blood, Ex-Wise Heads) and guitarist/composer Jon Durant have once again teamed up under the moniker Burnt Belief for the release of a new album of progressive ethno-ambient fusion instrumentals, titled Etymology. Today, the duo has teamed up withPopMatters to stream the first offering, "Précis," from the upcoming collaboration at:http://www.popmatters.com/post/186331-burnt-belief-precis-audio-premiere/.

"'Précis' seemed like an appropriate title, as it condenses the ingredients that make Burnt Belief what it is: deep atmospheres, unexpected twists, dynamic changes and the evidence of Jon and myself reacting to each other," Colin Edwin toldPopMatters.

Etymology, due out on October 21 via Alchemy Records, can be pre-ordered now through Burning Shed at: https://www.burningshed.com/store/exwiseheads/collection/19/ and JonDurant.com at: http://jondurant-com.myshopify.com/collections/frontpage/products/burnt-belief-etymology in addition to Amazon.com at: http://www.amazon.com/Etymology-Burnt-Belief/dp/B00NAZX8BA/ref=sr_1_1?s=music&ie=UTF8&qid=1410294068&sr=1-1&keywords=burnt+belief. The first 200 pre-orders through Burning Shed and JonDurant.com exclusively will receive a download code to receive five Etymologybonus tracks, including unreleased music from the two musicians' individual libraries and collaborative works.

The compositions which unfold across Etymology's 70 minutes showcase the duo's fruitful symbiosis and clear developmental path across their shared musical landscape. Assimilating diverse elements ranging from polyrhythms, deep ECM styled atmospherics and even angular nu-jazz abstraction, the result is an immersive, multi-layered and engrossing documentation of a remarkably sympathetic musical connection.

The album's title is a metaphor for the pair's working methodology, in which compositions evolve from an initial germ of an idea into a fully realized piece. The resulting work is often very different from its original concept yet still maintains the initial elements at its core.

"We feel like we've progressed within our shared approach, including some new harmonic, rhythmic and melodic elements," commented Jon Durant.


"Much of our compositional approach remains consistent from the first Burnt Belief record," he added. "For instance, a number of the pieces began as ambient cloud guitar atmospheres, which Colin would then explore and find rhythmic grooves to play over or with the clouds. Then, I would maybe re-arrange, construct melodic ideas, and send back to Colin for further input from him. In this way, the pieces evolve, sometimes very far from their original state."
For a taste of the new, 11- track offering, an Etymology teaser video

Edwin and Durant first teamed up for Durant's 2011 album Dance of the Shadow Planets, a wholly live in the studio documentation of their nascent musical chemistry centered around Durant's atmospheric compositions and featuring also the talents of violinist Caryn Lin and multi-percussionist Jerry Leake.

The follow-up to Dance of the Shadow Planets, 2012's eponymously titled Burnt Belief, was distance recorded, but a fully collaborative compositional affair with Edwin taking equal responsibility for the writing process. Having confidently cemented their working methods and musical connection with the well-received Burnt Belief, the duo undertook some live dates in the U.K. and Ukraine with Kiev-based female vocal duo Astarta (as Astarta/Edwin), a project Colin has been working on for some time, but presently on ice due to the current instability in the country.

Energized by working together in a live environment again in late 2013, Edwin and Durant reconvened to create the present album, Etymology. Whilst still retaining the strong sonic identity laid down on Burnt Belief, Etymology represents a considerable expansion and natural evolution of their sound, not least because of the additional input of three marvelous drummers (Vinny Sabatino, Dean McCormick and Jose Duque) to complement and reinforce the programmed electronic rhythms.

"Colin and I both felt that after two records utilizing hand drums exclusively, it was time to change it up and go with a live drum kit to augment Colin's rhythm programming. It ended up giving the pieces a much harder edge to them, and this in turn allowed me to push my guitars a little more over the top."