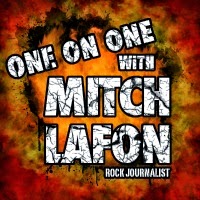 In episode 59 of One On One with Mitch Lafon, Mitch is joined by one-time LOU REED, ALICE COOPER and DAVID LEE ROTH guitarist, STEVE HUNTER. Talking Metal's Mark Strigl co-hosts.

Listen to the One On One With Mitch Lafon Podcast on iHeartRadio, iTunes, Spreaker, TuneIn and Stitcher.

In this episode's only interview, we speak with guitarist Steve Hunter about his new live CD & DVD called, Tone Poems Live. We reminisce about his days with Alice Cooper, pay tribute to guitar legend DICK WAGNER and talk about his playing with AEROSMITH, PETER GABRIEL and DAVID LEE ROTH. We also talk about his continued friendship with guitar great, Jason Becker.

***** The One On One With Mitch Lafon (part of the Talking Metal Digital Network) - Sammy Hagar CD giveaway is as follows... TWEET out the following as many times as possible between now and next Friday and you could win a copy of his new album 'Lite Roast'

One on One With Mitch Lafon's Official Twitter is: @1On1WithMitch

This Episode of One On One With Mitch Lafon is brought to you by the 'A World With Heroes' KISS tribute album and EP. Both available now on iTunes with all monies going to the Vaudreuil-Soulages Palliative Care home in Hudson, QC.

1) C’mon And Love Me by The Killer Dwarfs
2) Calling Dr. Love by Crash Kelly (featuring Four By Fate’s Sean Kelly)
3) Save Your Love By Matt Bradshaw
4) Every Time I Look At You by Dick Wagner
5) Nothin’ To Lose By the Killer Dwarfs and features piano by Bruce Foster (who played on the original KISS version 40 years ago)
6) Coming Home By Sudden Flames

Also be sure to check out the Defenders of the Old Festival 3 this March in NYC. Visit