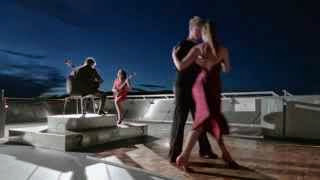 Pre-order the album; exclusive signed CDs, Vinyls, etc now from http://www.pledgemusic.com/thecommand...
This video was filmed on top of Norway´s most visited tourist attraction, the Holmenkollen ski jumping hill - one of the most famous sporting arenas in the world. It is situated "on top of" the capital, Oslo, with breathtaking views of the city and the Oslo Fjord.
The song is from their album, 2 guitars, The Classical Crossover Album and was recorded at Velvet Recording, Norway, in July 2014. Originally composed by Carlos Gardel and Alfredo Le Pera.
The Commander-In-Chief wants to thank this fantastic team;
World leading classical guitarist Craig Ogden, for accepting this challenge, and for recording a truly unique album!
The two amazing dancers from TangoTango in Oslo, Norway; AnneMarit and Magnus!!
Panorama Norge for fantastic work from both Drone pilot and camera man.
OMNI Production´s camera man Oscar Birk and FlixFilm´s camera man Derek Bateman!
Goodrich Bespoke for some fantastic tailor made uniforms to The CIC.
Elisabeth Nøkland Johansen for the lovely dress for the dancer.
Makeup artist Chiara Guizzetti!
Hair stylist Iris Jamne!
The team at Holmenkollen for their kind cooperation and help!
Special thanks to A.E. Hagen, who produced, directed and edited the video!

Craig Ogden had his 3rd number 1 album on the classical charts in the UK during the summer/fall of 2014. He has been nominated for Brit Awards several times and his debut album was Grammy nominated. He was recently featured as one of top 20 classical guitarists of all time by the prestigious ClassicFM radio and news site.
He is chief lecturer on Guitar at Royal Northern College of Music in Manchester, UK.

The CIC has been featured as "1 of 10 modern guitar Gods", by Metal Hammer UK. Total Guitar Magazine said "she is changing the face of the shred stereotype!" Her historic guitar duel version of P. Sarasate´s Zigeunerweisen Op.20, was on "top 10 viral videos of 2013" in Guitar World Magazine. She has been a guest on major TV Talk shows and has been featured in magazines and on radios all over the world.
Por Una Cabeza The Commander-In-Chief & Craig Ogden