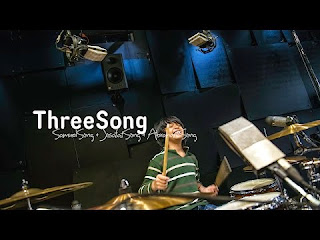 THREE SONG, in the form in November 2011 with personnel Samuel Song, who was only 12 years old, Josafat Song 9 years old, and his Papa, Dodo Micah, and then followed in 2013 his brother, Abraham Song (Song Abe) that this saaDSC01578t 9-year-old followed to join.

The personnel is quite unique because this jazz group fronted by children but their talent is recognized by the musician, not just musicians in the country, but in foreign-even their names are also known. SAMUEL SONG (nickname Sam) began playing drums at the age of 5 years, and fill berbai music clinics to school - primary school. Then switched to bass at the age of 12 years. Since then, Sam began to appear in berbaga music event with her ​​father at the jazz like iJazz Connection, Jazz Goes to Campus, and a jam session together Rasjidi Syndicate, idang Rasjidi Quartet, dr. Tompi, Indra, Bertha, Echa Soemantri, Siera Soetedjo, Mus MUdjiono and other musicians. Age of just turned 15 years unsuspected Sam was awarded the "Young and Talented Musician" from the University of Indonesia in the event Jazz Goes To Campus 2014, which makes it the first youngest musician who holds the honor. Josafat SONG. Energetic character so fitting position as drummer THREE SONG.

Josh who have a predilection for various types of these animals, since the beginning often accompany his brother, Sam, during a clinic - drum clinics to school - school, became interested to play the drums and continues to develop into a professional drummer. In addition to playing in various local events and International, a renowned drummer Mokhtar Samba (Drummer, Santana) specifically invited Josh to fill the holding clinics in Jakarta. ABRAHAM SONG, the youngest are often addressed by calling Abe is the younger brother of Sam and Josh.Starting from playing percussion, drums, piano and guitar, Abe finally deliver on kecintannya playing guitar. Until now, every appearance Abe makes the audience amazed because he was barely 10 years old.