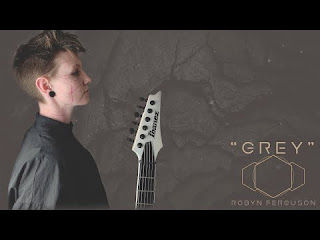 The astonishingly talented South African Prog Prodigy ROBYN FERGUSON is back with a bang! Despite the sundry adversities of the past year, Robyn set an ambitious goal for herself ... to release 3 EPs in 12 months; a purpose she is extremely happy to achieve with her new single "Grey" and EP “Triptych” (a collection of new tracks that include collaborations with astonishing artists like Latino American guitar virtuoso ADAM ALVARADO and chief creative driving force behind the Pyjama Planet Empire, MARK PYJAMA).

With her new single “Grey”, Robyn continues her journey forward through the void from the previous Satellite EP “Harbinger” (released August 2020), and represents the struggles of our mind. It is about discovery, becoming … the very thread of life, time and connection. The unknown and coming of clarity and the limbo between …


The new EP “Triptych” embodies the succeeding step in Robyn’s journey, referred to as the "Alizarin Chronicles". Her journey departed with her first solo EP "Alizarin" (released in April 2019). From here, her voyage ascended and fragmented with “Falling Forward” (released May 2020) and laid the foundation of her new creation to come, epitomized by her satellite EP “Harbinger” (released in August 2020). This juncture represented the past, present and future connected lines, the grounded substance for the evolved stage of her journey. Now “Triptych” as the subsequent step in her journey addresses the struggles of the mind, of thought and the conclusion of I. With each step, she forges her world, the chronicles … now anew and void of old mind.

Robyn Ferguson is a passionate musician from South Africa, who knows how to work hard and play hard! She is known for her dynamic live performances and adept guitar skills (with acts like Adorned in Ash and Sistas of Metal). The past 2 years Robyn has been super productive and flying solo, using her immense talent as a healing-and-driving force on her spiritual journey to rise above health challenges.

Robyn states that "there were many challenges faced, and some that are still being faced. I am happy to say that, despite these battles (and still having some nerve damage and paralysis in parts of my body), the creation of my solo work has been extremely liberating and exciting. These past 2 years completely kicked me into a different frame of mind, and I’ve found myself looking at the world through a different lens.

This period pushed and pulled me like no other, driving me to chase new ambitious goals, like creating 3 EPs in 12 months ... a purpose I am extremely happy to achieve with my new release “Triptych” (a collection of new tracks that will also include some collaborations with astonishing artists). My new single “Grey” (the first from "Triptych"), continues my journey fiercely forward through the void from my previous releases (Alizarin, Falling Forward and Harbinger), and represents the struggles of our mind. It is about discovery, becoming … the very thread of life, time and connection. The unknown and coming of clarity and the limbo between. My aim is to offer hope to those who are facing their own battles and inner demons."