The song was born for about ten years ago but it has been reconstructed into a reborn Identity. I think you may hear some of my influences in it and I also hope you will like and enjoy it as much as I have through the progress working with it. The song will be on my next album with the difference that there will be real drums recorded to it which I hope and think will make it even better.

I play all the guitars and basses on the song and I have also done the keyboard arrangement and the choirs are also my own throat....ahhh! So it's a song by me with me...

13-02-2008:
Mathias Holm posted another new track this time Green Water, a sophisticated bit of music as neo-classical segues into and out of fluid bluesy emotion. Check it out http://www.myspace.com/mathiasholm

05-02-2008:
I'm currently enjoying listening to Mathias Holm and his track, In Tears posted on MySpace: http://www.myspace.com/mathiasholm. Mathias Holm has been working on three projects lately and one of them is MindSplit. The band have just recorded a new song called The Traveler, it's also up on http://www.myspace.com/mathiasholm. The style of this song is quite different from the other songs of MindSplit. The plan for MindSplit is to release the first album this year. Check http://www.mindsplit.se/ for more details. 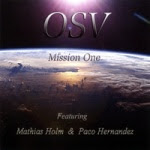 07-11-2007:
Only fair that I mention both players again... this time with more detail. O S V - Project is an all Instrumental project featuring progressive/fusion style music highlighted with top end guitar soloing and melody. The project was started by bassist Steve Sexton, Drummer Gary Oppert and Keyboard/guitar player Brandon Vaughn in 2006 with the intent to write several full length CD's and find the right lead guitar player(s) to compliment these projects. OSV feels they have done this on "Mission One" with Mathias Holm a great guitar player and Paco Hernandez. The recording for the first OSV CD "Mission One" is now being mastered and also features Jean-Do Leonelli (742) and Chris Cavera (Killbot Zero) both have guest performances on the CD. You know the CD will be a cracker!! 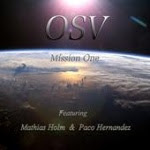 The track listing is as follows:

Well here's a demosong for my next album. It will be recorded real drums on it before I put it on a record. I think Jon Skäre will do some great drumming on it when he gets his hands on it. Maybe you can hear some of my Al Di Meola influences on the song but I don't think it sounds like an Al Di Meola song. I would be very happy to hear what you think of it!

27-03-2007:
Mathias Holm has uploaded the song His Majesty with OSV Project featuring Mathias Holm on the lead guitar. http://www.myspace.com/mathiasholm

Mathias Holm is fronting a new project from Sweden called MindSplit. The Progressive Metal band are working on a concept album title "Civil Human Art Of Significance" for release in 2006.

you can Check out the music on their mind waves web page and visit their forum to comment on the promotional mp3s:

In 1995 Mathias decided to record a solo CDwith drummer Mats Eriksson-Wigg. His CD is avaialble from guitar9: "Pictures Of A Dream"